Caring for the disadvantaged groups
Provide ambulances for relief operation
An entry level ambulance comes with a price tag of TWD million and may be of service for 6 odd years which is quite a big expenditure for most local governments sunk in heavy debts. Relief operations by the latter then suffer due to the poor conditions of the ambulance. After learning about this, ACES began to be officially involved in public welfare activities a few years ago by donating ambulances to districts requiring help. ACES shall select the "recipients" before donating an ambulance. ACES set up designated teams to learn about ambulance requirements of remote medical facilities based on the statistics of MOI, identify the level of ambulance requirements and do a field survey for internal review. The whole process may take up to four months and is aimed to make the most of every ambulance donated. 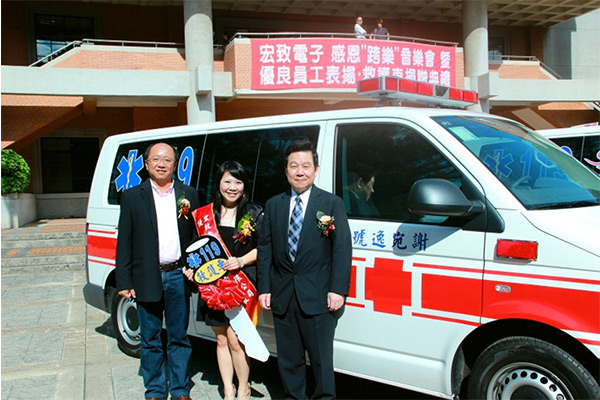 ACES began to implement its "Excellent Staff and Ambulance Donation" charity program in 2007, 10 years later in 2016, ACES has donated four ambulances each year with three of them under the name of outstanding employees and the remaining one by the chairman in name of his family. ACES adheres to the spirit of sustainable business and feedback to society which nourished it by regularly donating to non-profit seeking groups and spreading love and warmth to every corner of society. ACES has donated ambulances to the following administration districts in Taiwan: Yilan, Shenkeng Township in New Taipei City, Taoyuan, Hsinchu, Miaoli, Changhua, Guoxing Township in ​​Nantou County, Shuili Township, Shuilin Township in Yunlin County, Dapu Township in Chiayi County, Tainan City, Majia Township in Pingtung County, FengBin Township in Hualien County, Dawu Township and Luye Township and Lanyu Island of Taidong, and Lianjiang County, almost every corner in Taiwan has been marked with love from ACES.

As of 2015, in all corners of Taiwan where resources are needed, ACES donated a total of 32 ambulances with an amount just shy of TWD60 million. From 2016, ACES extended its donation programs to cover the Taoyuan Veteran Center with a Fukang bus, multi-functional service vehicle, 20 caring beds, 2 automatic blood pressure monitor, and 2 mobile libraries for the Taoyuan City Library. This is aimed to donate more resources to more people in a wider range and continue to pay back to society in more diversified approaches.

The Aug 8 Flood in 2009 devastated southern Taiwan and everyone who lived there was very concerned about the damages brought by it. When watching TV news on the flood relief operations there, ACES employees saw the "Qiu Shimin" ambulance donated by ACES working at Xiaolin Village, Kaohsiung County for victims rescue. They were so impressed by the scene and that's the biggest reward for doing good. ACES shall take up more social responsibilities to contribute, both mental and physical efforts, to Taiwan from north to south and east to west. In addition to the annual ambulance donation activities, ACES has other on-the-spot donations for different projects.